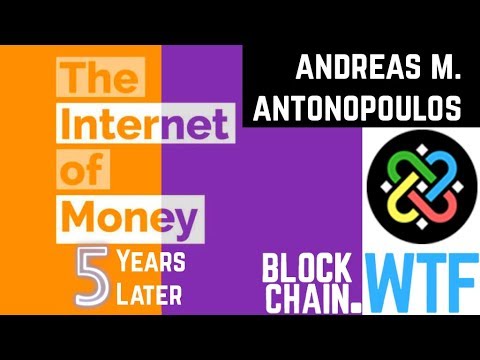 Update: Thanks everybody for your questions, the recording is done, we went a little over an hour and I didn't get to all of the questions but I think we covered most. This'll be out on Sunday the 2nd of July
Update 2: Episode is posted - Thanks again
Hey folks, Adam B. Levine (Proof) here from letstalkbitcoin.com.
tl;dr - If you have a strong opinion or concern about segwit you'd like Andreas Antonopoulos to answer, please post it here in the next few hours. Now to context:
In a few hours, Andreas and I will be speaking for LTB episode 336 about some of the concerns brought up in Dr. Craig Wright's recent article on Segwit. Andreas feels very strongly that Segwit is a good thing and honestly I don't have enough knowledge on the topic to have much of an opinion so I'll be playing the "listener surrogate" questioner role, trying my best to represent the viewpoints although I don't neccesarily share them.
So if you want your point of view represented in our conversation, share them here as a comment. Personal attacks or other forms of bullshit will be disregarded.
Thanks in advance!

Interesting discussion on Lets Talk Bitcoin with Andreas Antonopoulos and others about POW, and POS consensus systems.

Let’s talk bitcoin podcast: About ETF with Andreas Antonopoulos and Caitlin long amongst others. Great listen.

Andreas M. Antonopoulos mentioned on a recent Let's Talk Bitcoin there should be a site that lists the value of Satoshi - now there is one - satoshivalue.com

Lets talk bitcoin podcast: About ETF with Andreas Antonopoulos and Caitlin long amongst others. Great listen.

Let's Talk Bitcoin! #228: Sidechains with Adam Back and Andreas Antonopoulos - "Andreas sits down once again with Father-of-Hashcash Adam Back, this time to deep dive into Sidechain Elements: what it is, how it works and what it means."

Let's Talk Bitcoin! #228 - Sidechains with Adam Back and Andreas Antonopoulos

Narrative is Destiny by Andreas Antonopoulos by Let's Talk Bitcoin! on SoundCloud

Taken from LTB #414 Live Q&A
Stephanie Murphy: “What's everybody's view on Rootstock (RSK)?”
Andreas M. Antonopoulos: I don't think Rootstock is putting smart contracts on Bitcoin. Rootstock is allowing you to use Bitcoin to pay for smart contracts on the Rootstock Drivechain, which you could theoretically do by shifting money into Ethereum. In fact, recently I saw someone who had built a gateway that allowed you to make a Lightning payment that terminated in an Ethereum contract. So there's many ways to bridge different blockchains together. Quite honestly, I don't think we should be doing smart contracts on Bitcoin. Bitcoin doesn't do smart contracts, and it doesn't do smart contracts because it does security. That's not a trade off I think is worth doing. It's much better to leave that to a chain that has a much more experimental culture and can take bigger risks.
As to whether we can do smart contracts, that's not a binary question; it's a question of value. So can we do smart contracts that can keep $1,000,000 secure? Yes. $10,000,000? Maybe. $100,000,000? No, the DAO proved that. How about now? DAI is doing more, so maybe yes. So it's basically a moving front. As the the maturity of the smart contract ecosystem expands, we can do bigger and bigger stakes (no pun intended) within the smart contract ecosystem. Every now and then there's gonna be a fairly catastrophic failure that's gonna cause a regression in the amounts of money that's put in them. But essentially it's growing. We're proving this every day, and it's the same thing with Bitcoin. The way you measure security in a smart contract or you measure security in a cryptocurrency like Bitcoin is how secure is Bitcoin? X billion dollars. That's the stake that is sitting on it right now, unhacked so far.
BONUS: Bitcoin's security model as block reward approaches 0.
Stephanie Murphy: “Do you think Bitcoin will be able to shift from block rewards to transaction fees to maintain security as the block reward approaches zero?”
Andreas M. Antonopoulos: “This is one of the fundamental misunderstandings and dynamics of mining for most people, which is the idea that something suddenly happens sometime at an undescribed future, either at the next halving or in 2141. The truth is on a daily basis, every single miner in the industry looks at six or seven different factors: the efficiency of their mining equipment, the price of electricity in their local fiat, the cost of their operation system, the current price of Bitcoin in fiat, the reward that's available as a block subsidy, the average amount of fees they can get, and the relative proportion of hashing power. They decide based on all of these factors. Do I leave this specific machine on at its current efficiency, or do I turn it off, or do I point it to another coin? That happens every single day. Every single day that decision continues, it’s rebalancing all of these dynamic factors. So the shift between block subsidy and fees happened every single day since January 3rd 2009 and it continues to happen today.
Sometimes, the capacity of the blockchain, the number of transactions that are in there, the value of the fees mean that it really attracts miners because there's a lot of fees to take. Other times, the fees decrease, the number of transactions decreases, so they're now more reliant on block subsidy and then it swings back and forth and back and forth. It's gonna oscillate in that way all the way to 2141.

Halving on the way: the cost of bitcoin in May

Hi Bitcoiners!
I’m back with the 31st monthly Bitcoin news recap.
For those unfamiliar, each day I pick out the most popularelevant/interesting stories in Bitcoin and save them. At the end of the month I release them in one batch, to give you a quick (but not necessarily the best) overview of what happened in bitcoin over the past month.
You can see recaps of the previous months on Bitcoinsnippets.com
A recap of Bitcoin in July 2019
Adoption
Development
Security
Mining
Business
Education
Regulation & Politics
Archeology (Financial Incumbents)
Price & Trading
Fun & Other

In this interview, I talk to Bitcoin Speaker, Author & Educator; Andreas M. Antonopoulos. We discuss toxicity in the Bitcoin community, the steps to better Bitcoin privacy and what an xPub is. Views: 1,380 Andreas M. Antonopoulos is a technologist and serial entrepreneur who has become one of the most well-known and well-respected figures in bitcoin. As an engaging public speaker, teacher and writer, Andreas makes complex subjects accessible and easy to understand. As an advisor, he helps startups recognize, evaluate, and navigate security and business risks. As a bitcoin entrepreneur, Andreas ... On today’s episode of Let’s Talk Bitcoin! you’re invited to join Andreas M. Antonopoulos, Adam B. Levine, Stephanie Murpy and special guest Richard Myers for an in-depth look at the past, present and future of ‘Mobile Mesh Networking’ technology and the open source LOT49 protocol built on top of lightning. Andreas M. Antonopoulos is a best-selling author, speaker, educator, and highly sought after expert in Bitcoin and open blockchain technologies. He is known for making complex subjects easy to understand and highlighting both the positive and negative impacts these technologies can have on our global societies. As an educator, his mission is to educate as many people as possible, in as many ... At the fifth anniversary of the Let's Talk Bitcoin Podcast, Andreas Antonopoulos took the stage to address some of the issues that the crypto community faces in relation to adoption and trust. His main point is that a strong and active community can help lead to a greater adoption, and therefore bring new all-time highs that are actually sustainable.

Let's Talk Bitcoin was launched in 2013 and quickly became a premiere podcast in the Bitcoin space. It is curently the longest running English-language Bitcoin podcast. On April 25, 2018 some of ... Andreas Antonopoulos is a best-selling author, speaker, educator, and one of the world’s foremost bitcoin and open blockchain experts. He is known for delivering electric talks that combine ... http://letstalkbitcoin.com/blog/post/episode-41-andreas-the-teacher A collection of my talks on bitcoin Lets Talk Bitcoin is a distribution partner for the Chain Reaction Podcast, and our current show features paid sponsorships which may be featured at the start, middle, and/or the end of the ...